Average RN Salary in California: See How Much CA Nurses Make in 2022

California ranks first among all states for registered nurse (RN) salaries, with RNs in the state earning an annual mean wage of $124,000. The nation's 10 highest paying metropolitan areas for RNs are all located in California, offering salaries of $124,000 to well over $155,000.

In addition to high rates of compensation, employment opportunities in the state continue to expand. California RNs can expect a projected job growth of 16.7% from 2018-2028, well above the national average.

The demand for RNs continues to grow across the country. Becoming an RN in California can lead to especially rewarding employment opportunities. RNs in California make the top salaries in the nation, earning 49.8% higher than the national average. California RNs earn an average yearly salary of $124,000 and an average hourly pay rate close to $60.

Several factors contribute to the higher RN salary in California. A strong union movement for nurses in the state and the high cost of living keep salaries competitive. Licensed vocational nurses (LVN) in California are not authorized to administer the same level of patient care as their counterparts in other states, resulting in more job opportunities for RNs who can provide a broader scope of practice. In addition, the demand for RNs continues to grow due to nurse retirements and the increasing need for healthcare, especially among the state's older population.

Over 85% of RNs in California earn an average salary above $125,000 a year. RN salaries range from $78,070 among the bottom 10th percentile to $165,620 for the top 90th percentile, with a median of $125,340. Compensation rates vary by type of employer, location, degree level and specializations, and years of employment. 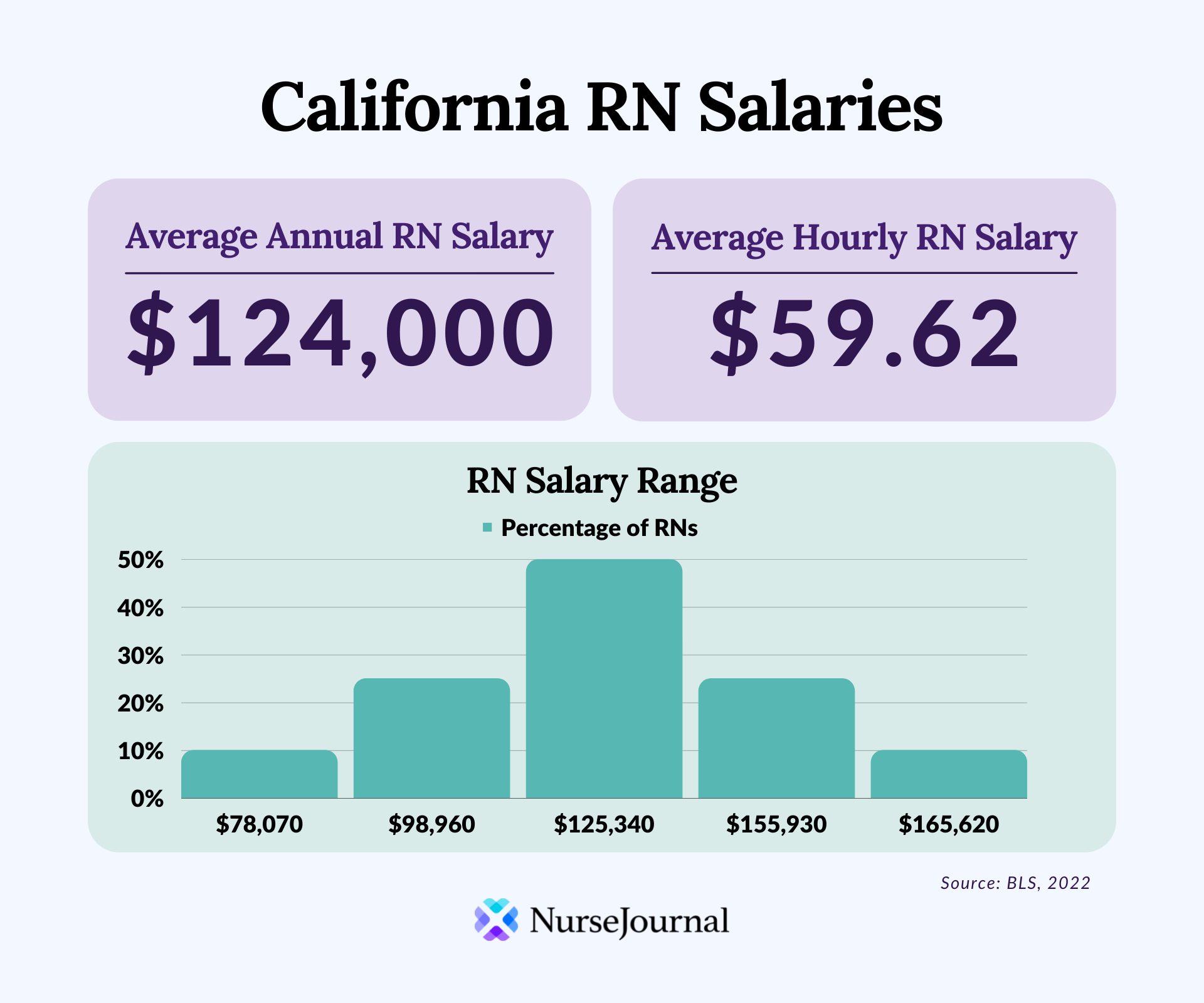 Aspiring RNs should consider how the cost of living in the state where they intend to practice will affect their earnings. RNs who work in a state with higher cost-of-living expenses may have to adjust their salary expectations to accommodate personal needs, family obligations, and desired quality of life.

The cost-of-living index measures how much an individual needs to spend to meet a certain standard of living, with a rank of 100 equal to the national average. According to the U.S. Bureau of Economic Analysis, the cost-of-living index adjusts salary based on regional price parity (RPP), based on the cost of essentials, such as clothing, housing, food, utilities, medical care, and transportation.

California's cost-of-living index is 110.4, the fourth highest of all fifty states. This means that the cost of basic goods in services in the state runs 10.4% higher than the national average. However, even when adjusted for cost of living, the average RN salary in California remains competitive. California's RNs earn an average salary adjusted for cost of living of $111,104, ranking first among all states.

Highest-Paying Cities for RNs in California

This table lists the top-paying urban centers for RNs in the state, with all five locations offering salaries above the state average of $124,000. Not only do these metropolitan areas provide generous salaries and job prospects, but their residents enjoy the benefits of the California lifestyle, characterized by good weather, a diverse culture, and an abundance of entertainment and recreational options.

RNs working in Northern California's Bay Area earn average salaries of over $150,000, the highest in the state. San Jose and San Francisco, known for their cultural diversity, dramatic landscapes, and a year-round mild climate, rank among the most desirable places to live in California, with San Jose offering a more affordable cost of living.

These five urban areas are home to some of the most prestigious healthcare organizations in California, including over 40 Magnet hospitals. The Magnet hospital designation, awarded by the American Nurses Credentialing Center, establishes a benchmark for quality healthcare and consistently above average national patient outcomes. Magnet hospitals offer RNs better work environments, higher job satisfaction, and top salaries.

Average Salaries for Other Nursing Roles in California

Nursing assistants and LVNs without a college degree earn considerably less than RNs. While RNs can enter the field after earning an associate degree in nursing, many employers prefer to hire RNs who have completed a bachelor's degree. A bachelor of science in nursing (BSN) generally enhances job and salary prospects. Factors like the type of employer, geographic location, and work experience also influence compensation levels.

Becoming a board-certified advanced practice registered nurse (APRN) leads to even greater career advancement and earning potential. RNs who earn a master of science in nursing (MSN), with APRN specializations as nurse midwives, nurse practitioners, and nurse anesthetists, rank among the highest paid nurses in the country. RNs with an MSN can earn an average of $23,000 more than those with a BSN degree.

Cost-of-living data is collected from the U.S Bureau of Economic Analysis real personal income for states and metropolitan areas, released on December 14, 2021. Registered nursing salary adjusted for cost of living is calculated by multiplying each state's RN salary by its regional price parity (RPP). RPP measures differences in the cost of goods and services in a region compared to national prices.