Based on the most up-to-date NP salary data released by the U.S. Bureau of Labor Statistics (BLS), this guide presents information on current compensation trends. Nurses interested in NP careers can learn about NP salary by state, cost of living adjustments, and states with the largest changes in NP earnings.

What is the Average Nurse Practitioner Salary in 2022?

This section presents an overview of NP salary distribution across the U.S, using the latest data from the BLS. Readers will find annual average salary figures for all 50 states and a list of the highest-paying states for nurse practitioners. 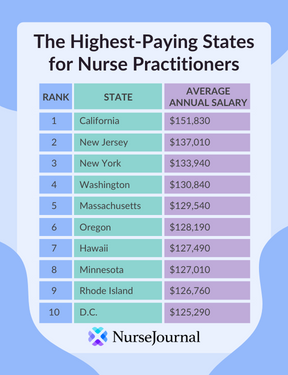 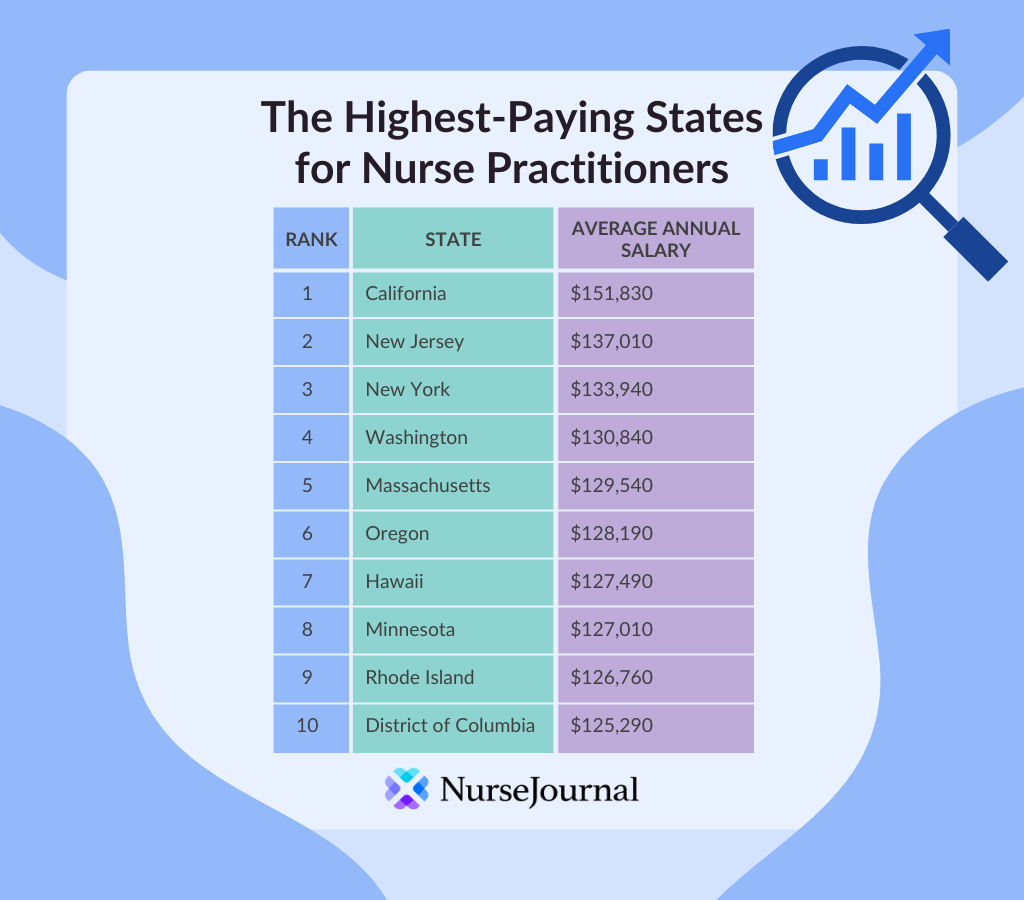 NP salaries vary significantly across the country. Western and northeastern states dominate this list of the best-paying NP salaries. In contrast, southern states tend to offer the lowest salaries. California tops the list with NPs earning an average of $151,830 annually — over $56,000 more than the lowest-paying state, Tennessee.

Urban centers tend to offer higher pay than rural areas. For example, northern California is home to thetop five metropolitan areas for NPs in the country.

Cost of living plays a significant role in compensation. Areas where NP demand continues to increase due to nurse retirements and a growing need for healthcare by an aging population also offer lucrative opportunities. In states with high cost of living figures and high demand for NPs, these nurses can earn well over six figures.

Southern states with lower living expenses, such as Tennessee, Alabama, and South Carolina, tend to offer lower annual salaries, ranging between $95,000 and $103,000.

Another factor that may contribute to higher earnings in some states is nursing unions. Western and northeastern states have developed stronger union movements than the southern states. Nursing unions have successfully bolstered compensation rates by negotiating for pensions and other benefits.

The Highest-Paying States Adjusted for Cost of Living

The cost of living where NPs intend to practice will affect their overall earning potential. This table shows the top ten highest-paying states for NPs adjusted for the cost of living index.

According to the U.S.Bureau of Economic Analysis (BEA), the cost of living index (or regional price parity) measures how far your earnings will go based on the regional price of goods and services across states. The index, with 100 as the national average, takes into account the cost of essentials such as food, housing, utilities, healthcare, and transportation. 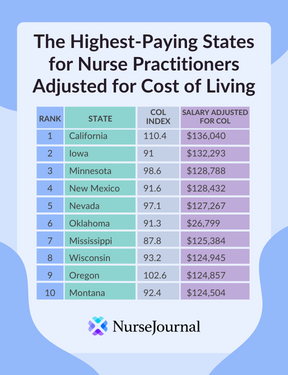 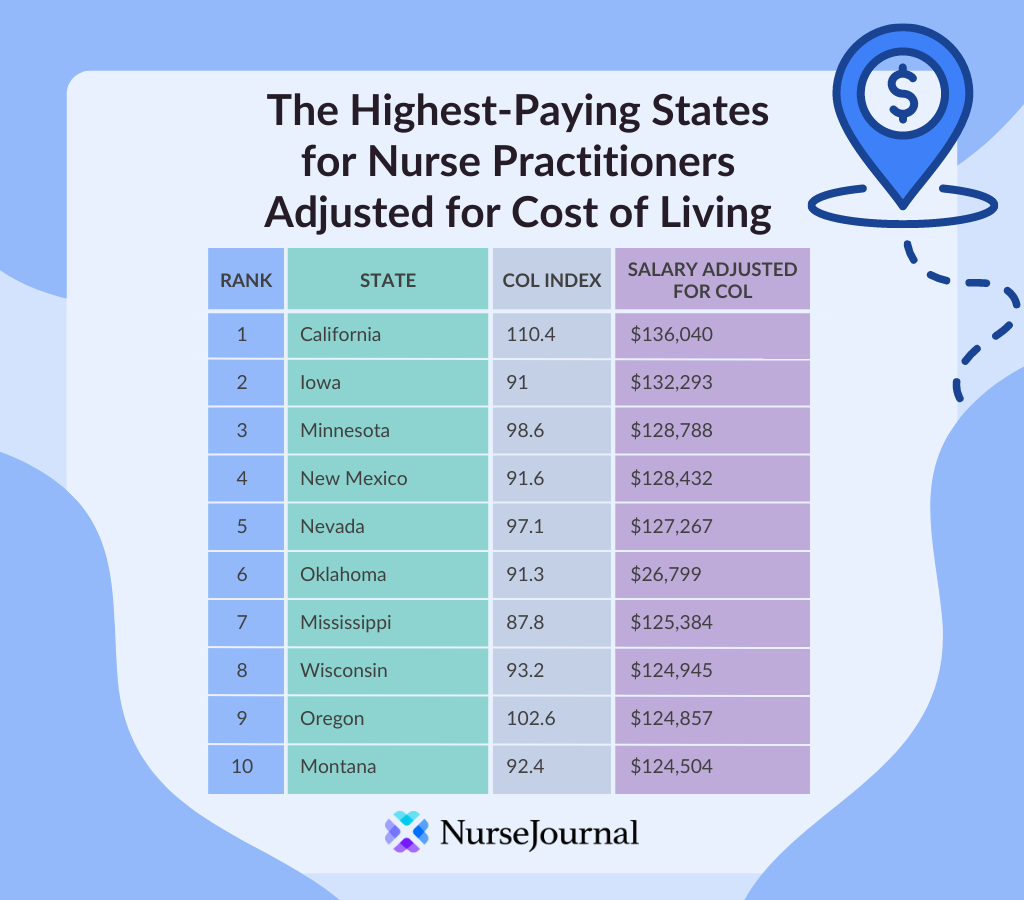 Even when adjusted for cost of living, NP earnings in all fifty states top six figures. Adjusted salaries in the top ten highest-paying states range from $124,504-$136,040. California and Oregon rank higher than the national average for cost of living. NPs employed in states with higher cost of living rates may have to adjust their salary expectations in light of how much they need to maintain their desired standard of living and personal and family obligations.

Based on the annual mean wage adjusted for cost of living, California and Oregon still rank among the top ten best-paying states for NPs, with California maintaining its top rating for the highest NP salaries in the country.

Top and Bottom States by Change in Nursing Salary

Overall, NP compensation has grown in almost every region of the country, with particularly large increases in Iowa and South Dakota. States with large rural populations, including Idaho, Tennessee, Wyoming, Missouri, and Utah, report the largest salary decreases.

States With the Largest Percentage Increase in Median Annual Salary

States With the Largest Percentage Decrease in Median Annual Salary


Many of the same factors that have led to the expanding demand for NPs account for salary increases. The nursing shortage, demand for more healthcare services by the aging population, and growing rate of nurse retirements all contribute to rising compensation levels. As more states experience physician shortages and seek to reduce healthcare costs, they grant broader practice authority to NPs, making them more valuable to employers.

The COVID-19 pandemic has negatively affected both NP employment and salary levels in some areas. A 2020Medscape nursing compensation survey reports that 20% of advanced practice nurses, including NPs, worked fewer hours during the pandemic. Inpatient treatment for non-emergency conditions and ambulatory visits for routine medical issues both declined during the pandemic, resulting in reduced hours, furloughs, and layoffs for some NPs.

If you're looking for more information on nurse practitioner salaries in all 50 states and the District of Columbia, the following table is a helpful resource that includes adjustments for cost of living. Find your state, a state where you previously lived, or perhaps a state where you might wish to relocate, and compare the data to your personal economic reality, desired lifestyle, and what that state has to offer you and your family.

Cost-of-living data is collected from the U.S Bureau of Economic Analysis Real Personal Income for states and metropolitan areas, released on December 14, 2021. Nurse practitioner salary adjusted for cost of living is calculated by multiplying each state's RN salary by its regional price parity (RPP). RPP measures differences in the cost of goods and services in a region compared to national prices.

Employers may reduce staff turnover and nurses may experience less violence in the workplace with mental health checks. Learn the right way and the wrong…
by

How Nurses Can Celebrate Black History Month at Work

Black History Month celebrates history and culture while promoting diversity and encouraging empathy. Support these activities in the workplace.
by

Correctional nurses meet a challenging healthcare need in prisons. Check out the experience of one nurse and more about a day in the life of…
by